The project will help secure a future for several animals that are threatened or extinct on mainland Australia, and these ecosystem engineers will play an important role in restoring the Dirk Hartog Island ecosystems.

The Return to 1616 project aims to restore Dirk Hartog Island (DHI) National Park’s habitats and native animal populations so that they are similar to what Dirk Hartog would have seen when he landed there in 1616.
The primary goal of the project is to re-establish at least 10 terrestrial native mammal species on the island, and establish at least another two native mammal species that may have previously occurred there, along with healthy vegetation and ecosystem processes to sustain the island’s biodiversity.

The project will be implemented over two stages with the first stage of the project is focused on the removal of pest animals including feral cats, goats and sheep from the island allowing for the second stage of native fauna translocations. The first stage of the project was completed on 30 June 2018 and the second stage will be implemented over 12 years to 2030.  Both stages of Return to 1616 are largely funded by the GBI-NCB Fund with in-kind support from the Department of Biodiversity, Conservation and Attractions (DBCA).

Significant progress has been achieved since the project commenced in February 2012 with key project staff appointed in 2012 and management and steering committees established.  In May 2014 DBCA received delivery of Wirruwana, a purpose-built high-speed landing craft to transport staff, vehicles and equipment necessary to service the project.

Staff accommodation camps were established at Herald Bay and Sandy Point and construction of a cat barrier fence across the island was completed in 2014 to assist with feral cat eradication.  A network of cat monitoring tracks and motion sensing cameras was installed for detection and monitoring of cat activity and the island was aerially baited for cats in 2014 and 2015.  The last cat was detected on DHI in October 2016.  To assist in confirming eradication, DBCA contracted the use of cat detector dogs, and conducted nine mid-season intensive cat monitoring programs for two years after the last cat was removed.  Feral cats were declared eradicated in October 2018, with an independent evaluation of the process and methodology used to undertake cat detection and eradication on DHI corroborated by Island Conservation in early 2019.

A cat barrier fence has been installed across the island, separating the island into two management sections to assist the staged cat eradication program. Two aerial cat baiting operations were completed in May 2014 (entire island) and May 2015 (north of the cat fence). An intensive cat monitoring and trapping program commenced south of the cat fence in July 2014, with only one feral cat photographed on the monitoring cameras since the last known cats were removed in October 2014.

Eradication of sheep and goats from DHI commenced when the former lessee began destocking in 2007 in anticipation of the island becoming a national park.  Ground shooting operations were conducted by the department in 2008 and 2009.  After October 2009, when the national park was established, regular aerial shooting operations began.  Sheep were eradicated by June 2016, and goats eradicated by November 2017.

A biosecurity implementation plan was developed with input from island stakeholders to guide biosecurity actions by DBCA, and to encourage voluntary cooperation by visitors and other stakeholders.  Keeping weeds, pest animals and diseases off the island is crucial to the success of the project.

A weed management and action plan will continue to guide the management of invasive plant species on the island.

Three surveys for the introduced black rat conducted in 2011, 2013 and 2014, failed to detect the rat on the island or in the communities of Denham, Useless Loop and Monkey Mia.

Surveys were conducted on three threatened bird subspecies endemic to the island: the rufous field wren, southern emu-wren and white-winged fairy wren.  Modelling of distance-sampling data collected in 2015 and 2016 demonstrated that the fieldwren is common and widespread on the island with preliminary population estimates between 12,000–20,000, the emu-wren is moderately widely distributed with a preliminary population estimates between 17,000–37,000 and the fairy wren is moderately widely distributed with preliminary population estimates between 15,000–24,000. Additionally, genetic work carried out to determine if the rufous field wren is genetically distinct from the mainland populations found that all Western Australian populations are part of the same species and the DHI subspecies is recommended for removal from threatened species lists.

A study evaluating vegetation recovery using satellite imagery has shown that with the removal of sheep and goats and since destocking began in 2008, by 2018 35 percent of DHI has experienced a significant increase in vegetation cover.  Furthermore, analysis of the sand dune extent has shown a steady increase in dune coverage from 1957 to 2009, then a dramatic decrease between 2009 and 2018.

With the sheep, goats and cats gone, habitats are recovering and the natural processes are starting to return.

Following the confirmation of cat eradication 90 banded and 50 rufous hare-wallabies were captured and released on DHI in September to October 2018 under stage two of the project.  Many of the female hare-wallabies had pouched young when released, particularly the rufous hare-wallabies.  Intensive monitoring has revealed that all collared animals were known to be alive and in good health three months after release.

Prior to this a significant amount of planning was undertaken to identify suitable locations in which to introduce animals, identify appropriate source populations to supply animals for introduction to DHI and develop monitoring protocols to ensure successful establishment of new populations.

More information on the Return to 1616 project is available on the http://www.sharkbay.org.au website. 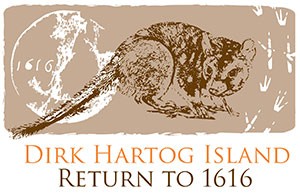